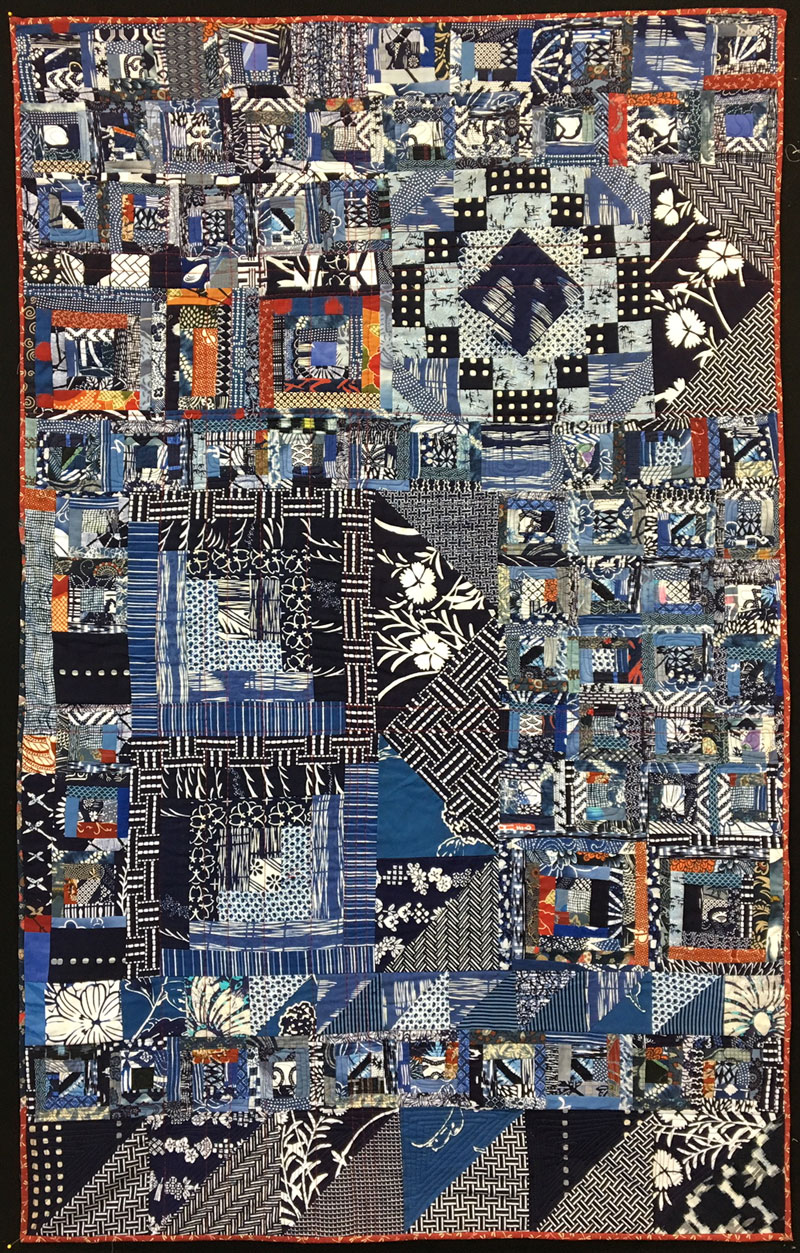 This quilt began with a box full of 1 in. wide stripcut Japanese fabrics from a friend, Virginia Aribe, who sadly passed away in January 2019. Virginia was a beloved member of the same chapter of Quilters Unlimited that I am (Burke). The box also contained some quilt blocks using the fabrics that Virgina had already started. 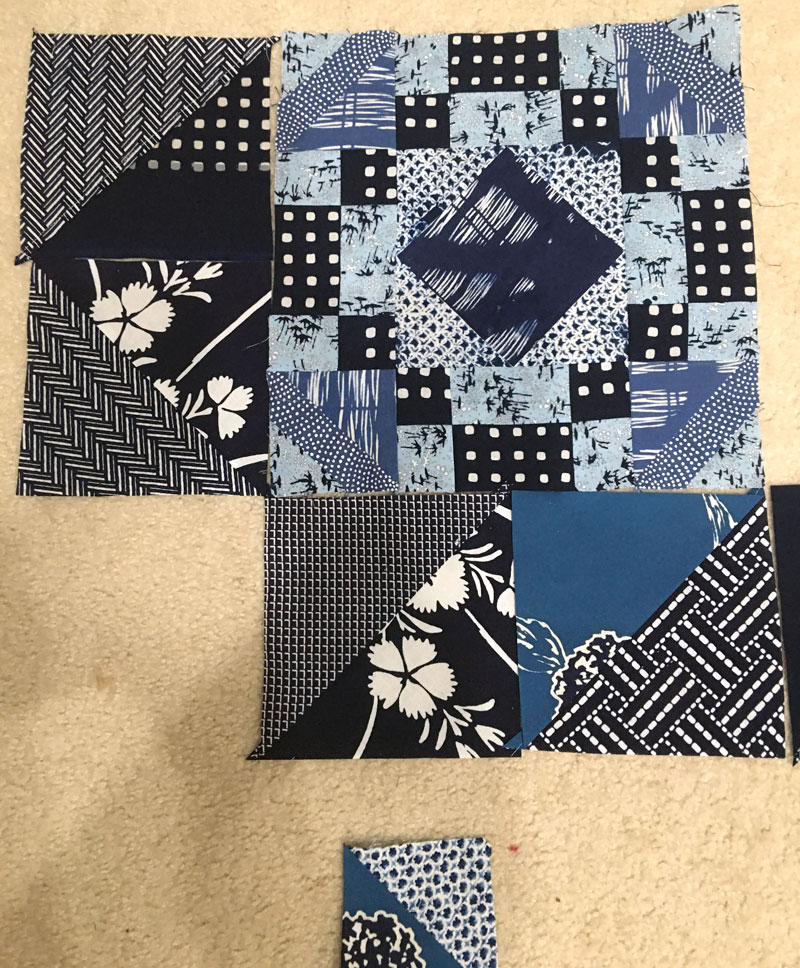 Japanese fabrics have long been some of my own favorites, so I thought I would challenge myself to take Virginia’s squares (some pictured above) and create some of my own to combine into a new quilt. 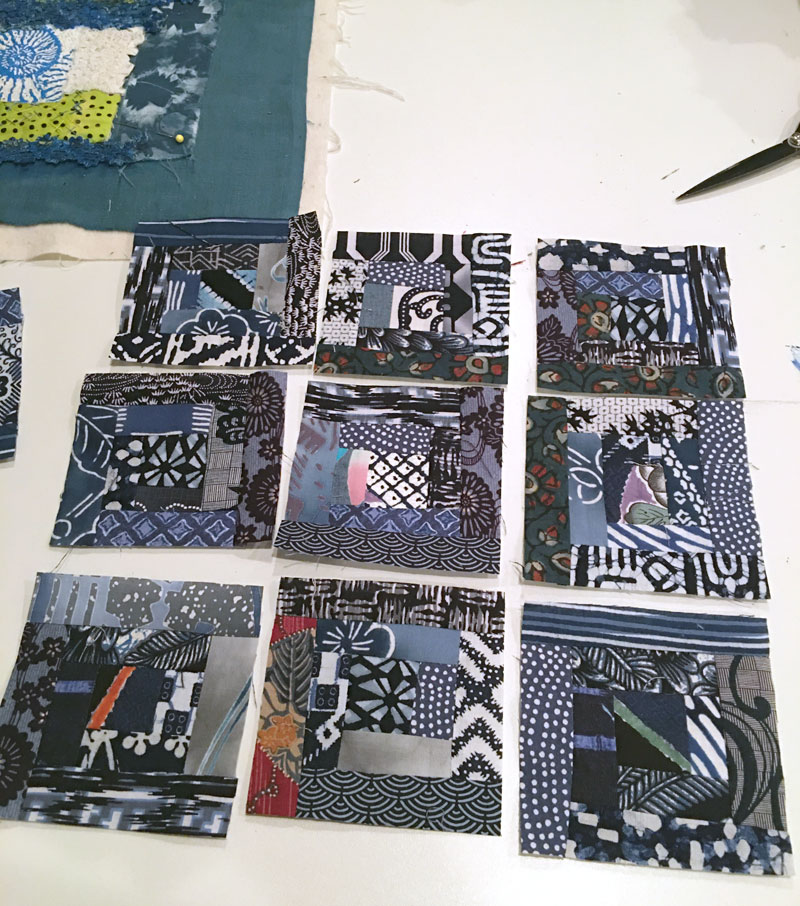 I began to make small log cabin blocks from the strips. I’ve joked that the log cabin block is the only one I know how to make! But it’s my go-to for a reason, it’s easy, showcases fabric well, and there’s so much you can do with your layout depending on how you structure the block’s colors. 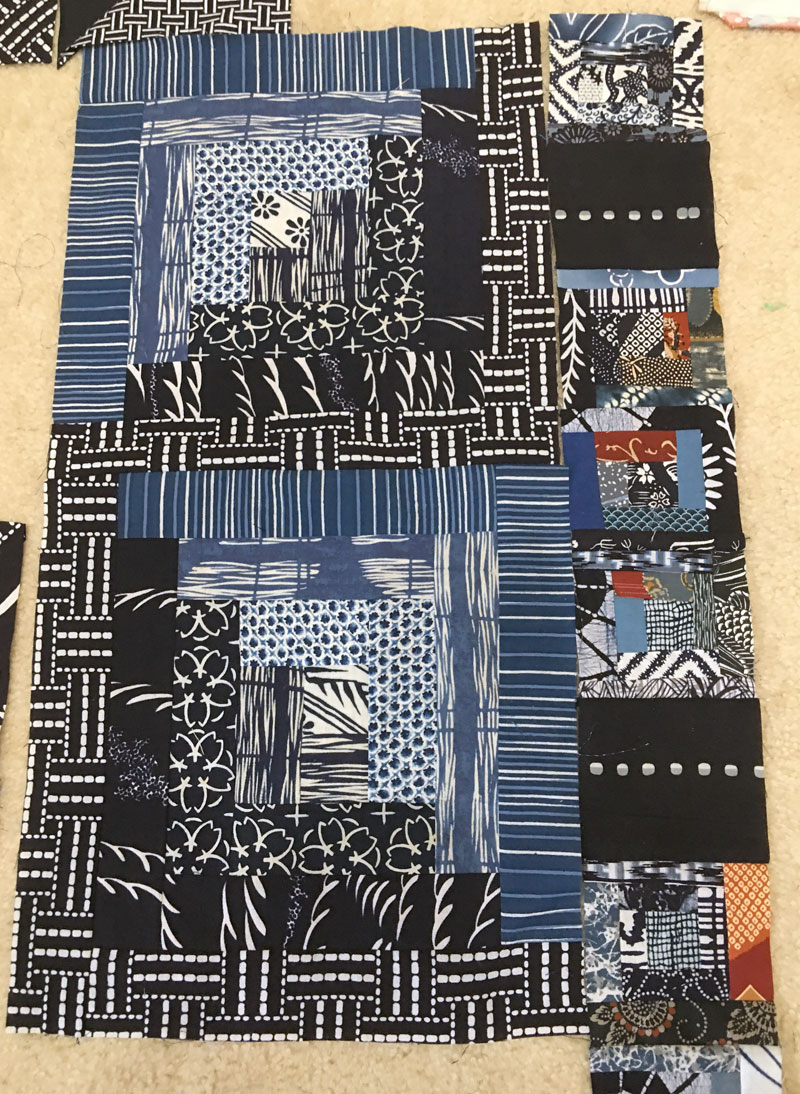 I wanted a hint of red to contrast with the beautiful shades of blue and white, so I made sure that some of the blocks I created had a little included, from Chinese Red to Brick Red – not a lot, but little touches so the eye searches for it. Above, you can see my smaller log cabin blocks to the right of more of Virginia’s original blocks. 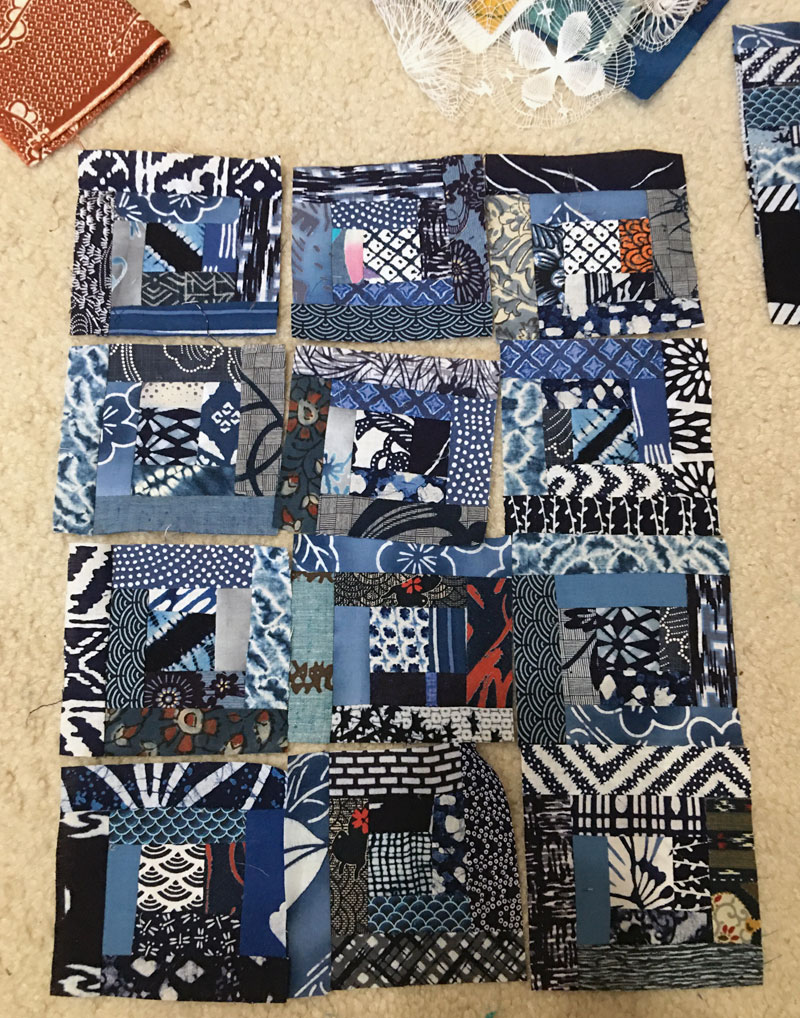 More of my blocks are above. I squared them up, kind of …

Originally I tried to combine Virginia’s blocks and my new one with another piece that I had been working on that contains indigo. 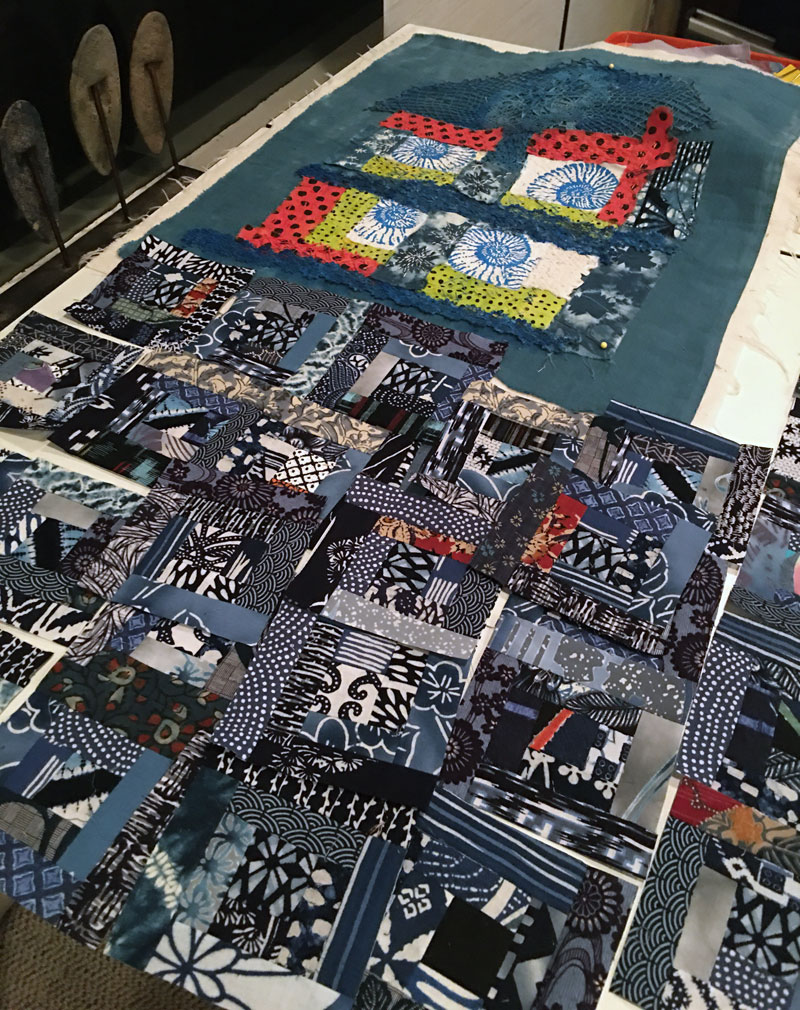 Longtime readers and customers will know we often like to say that fabrics “play well with others.” Pictured above, I decided my addition was not going to play well, so I removed it from the assortment of quilt blocks. 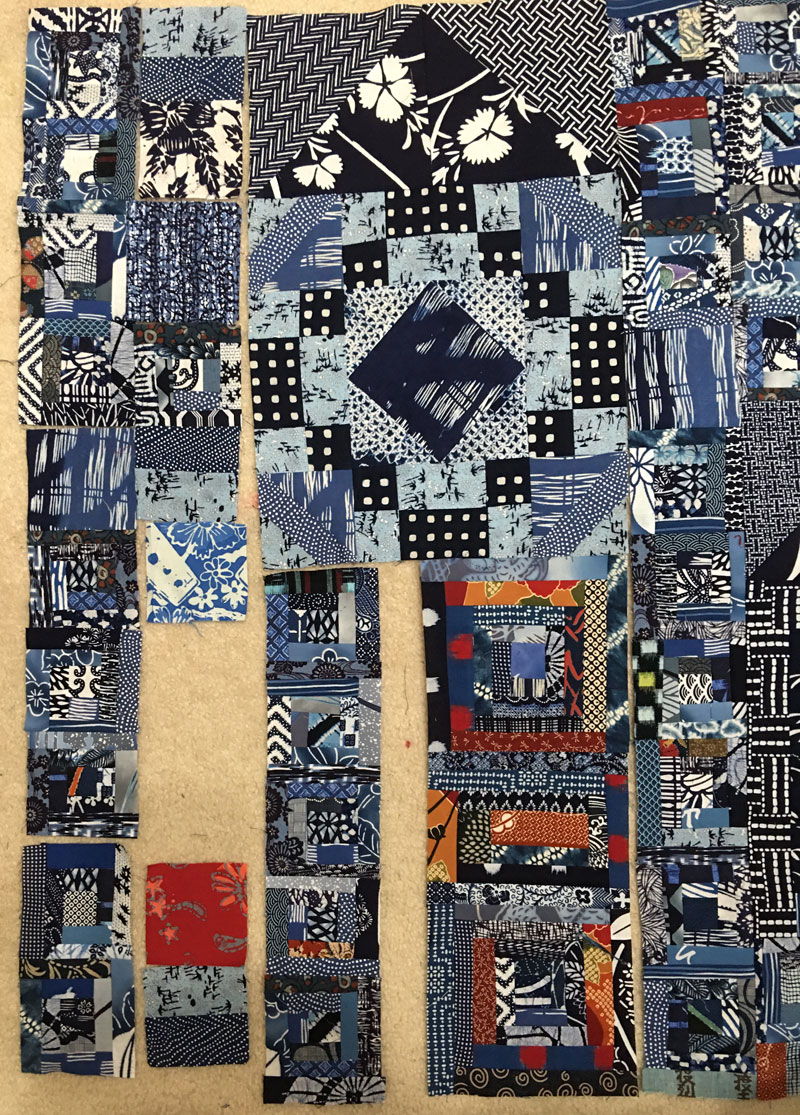 So with a pile of small blocks, I began trying layouts, assembling them into larger blocks, and then rows, and then the quilt. 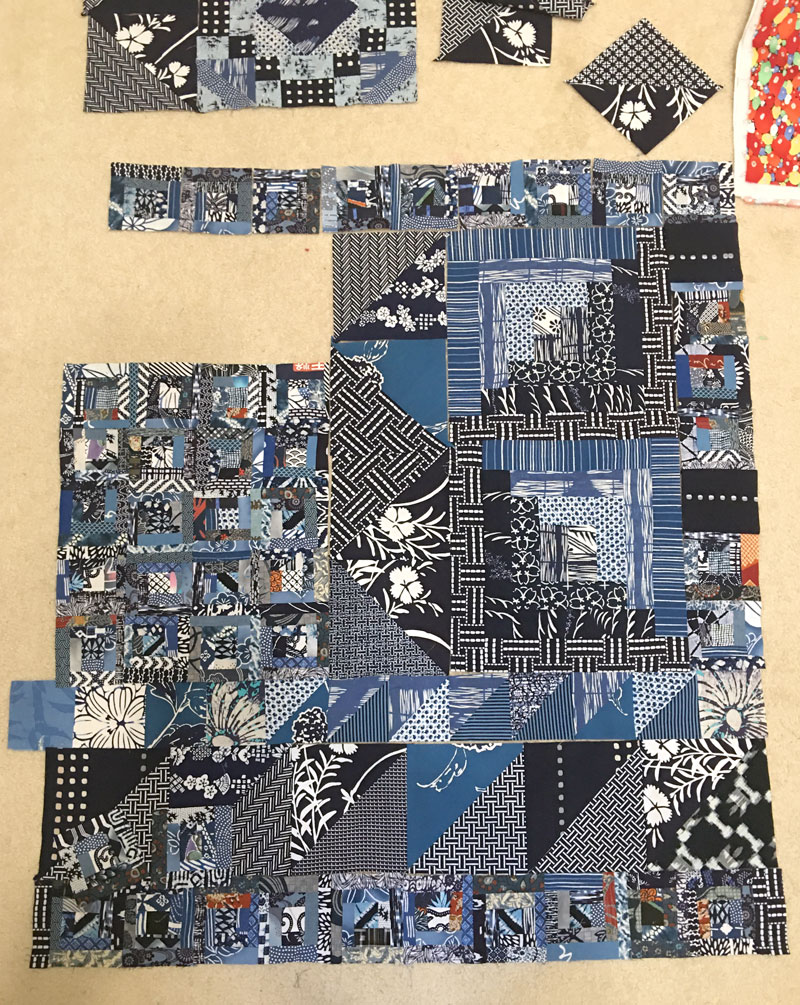 This kind of improv piecing and assembling is something like building a puzzle without having the boxtop photo to refer to. 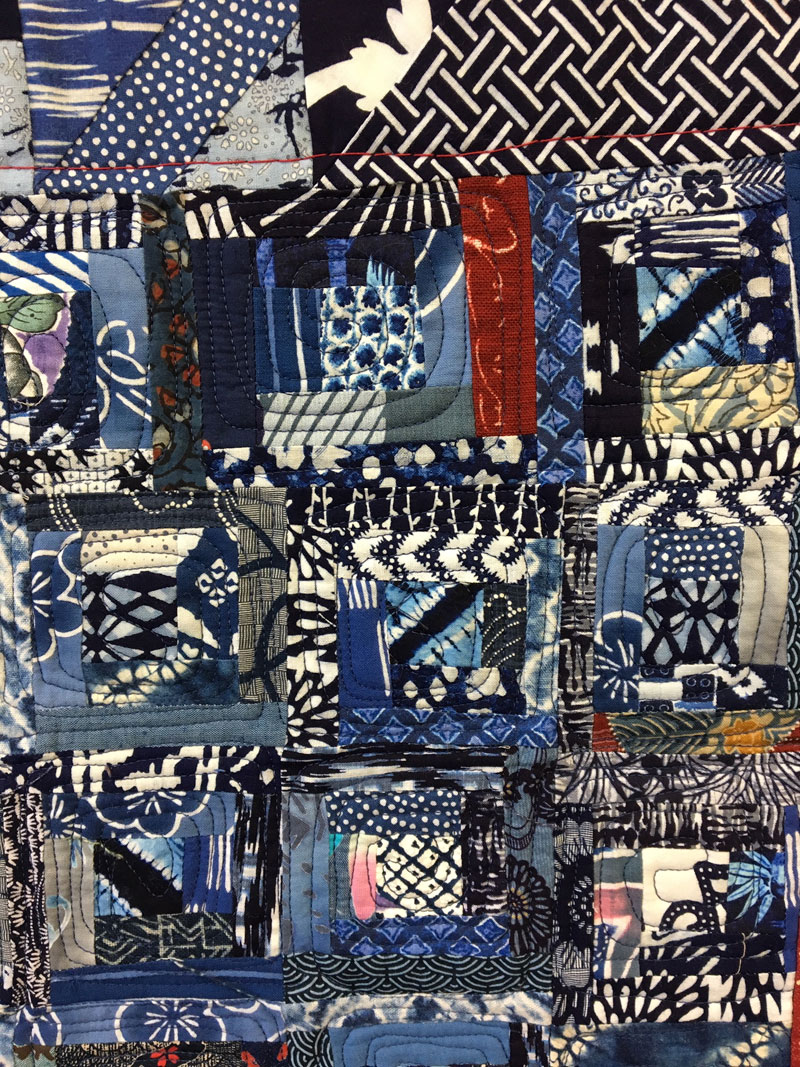 Once I finally had my layout completed, I layered my backing and batting and got to work quilting it. I used the BERNINA Q20 and a variety of free-motion designs. 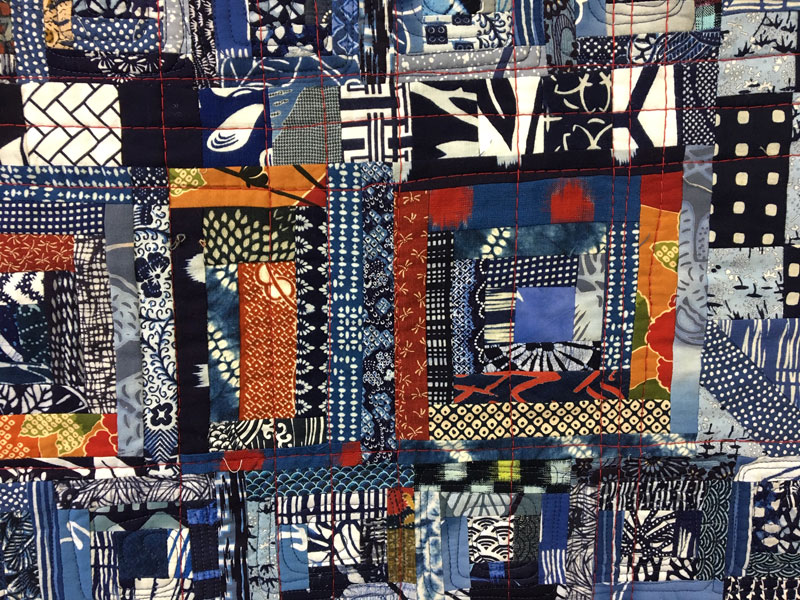 In addition to blue thread, I threw in some red (seen above) too.

I completed Virginia’s quilt this spring — the Japanese scraps from her had been calling me for quite a while. While she has passed from this life, her creativity, kindness and strength carries on… thank you, Virginia!