It’s flattering when we learn that people who have traveled to the Alexandria VA area (to visit family, while on business trips etc.) take the time from their busy schedule to come visit us in person. One recent visitor was Elayne Logan Currie. Last November she was in town to visit her mother-in-law and purchased one of our handcrafted batik panels by the renowned artist Jaka. Elayne visited Artistic Artifacts again recently and told us about her community’s amazing Read Together program. She showed us a photo of the quilt she made with that Jaka panel, inspired by the 2017 book, Homegoing by Yaa Gyasi. We begged her to share, and she did… so now we want to share with you! 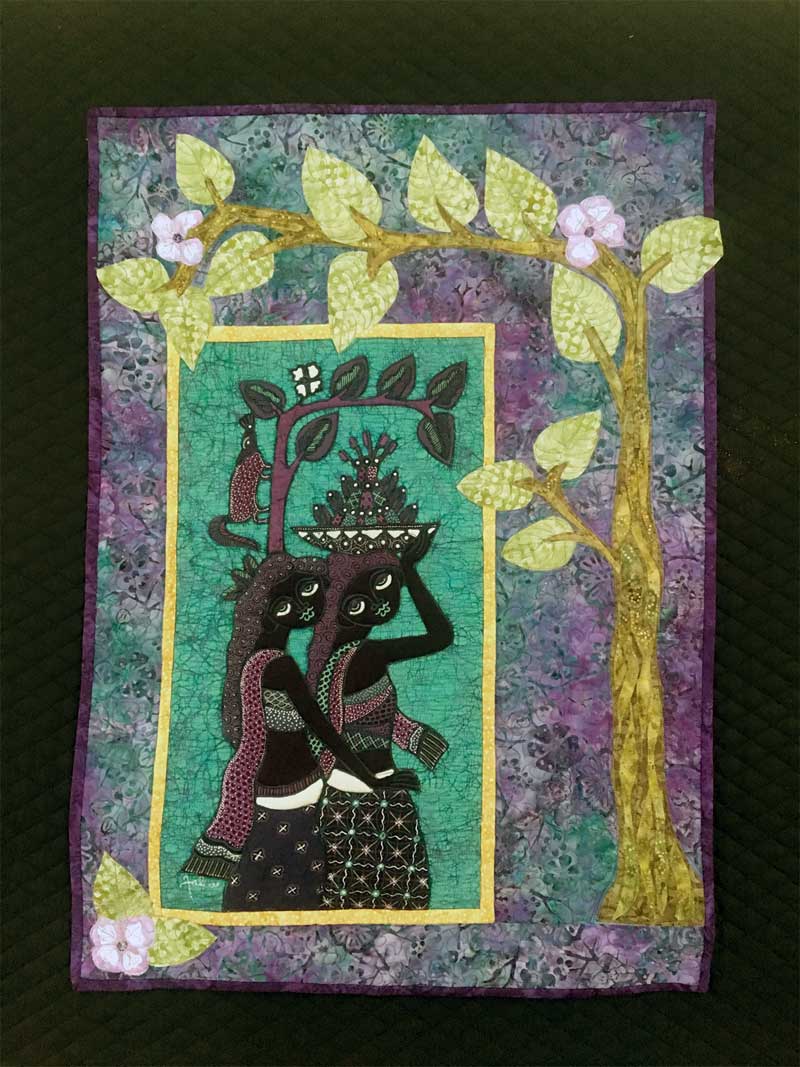 “A Novel Idea… Read Together“ is the largest annual community reading program in Oregon. Thousands of Deschutes County residents share the common bond of reading a selected book and participating in related cultural and literacy events each spring. Among the events, the Deschutes Public Library creates art exhibits for display, inviting artists to create and submit original art inspired by the selected book. The following is Elayne’s quilt submission details:

What Could Have Been
by Elayne Logan Currie,
March 2017 (quilted by Sue Shimke)
Inspired by the book Homegoing by Yaa Gyasi

While visiting my mother-in-law in Alexandria, Virginia I have discovered a quilt shop near her home that dyes a lot of their own fabric and has unique pieces of material from around the world. I fell in love with the centerpiece of this quilt last November, anticipating that it might be perfect for a Novel Idea in our community somewhere down the line. I would never have imagined that only a few short weeks later, with the announcement of Homegoing as our community read this year, that this panel would be put to use immediately.

The book Homegoing is a heart-wrenching novel that clearly links the history of slavery to today’s injustices still perpetrated on the backs of our black citizens. I am left wondering how the African American people have survived all that has been placed in their way.

This quilt is my attempt to wave my magic wand and go back to the beginnings of the half sisters Effia and Essie. How different would their worlds have been if they had known each other and had each other’s backs in a sisterly love? How different would our world be if slavery had never existed to begin with? The trees symbolize the family lineage we read about in Homegoing. The two leaves in the bottom left hand corner of the quilt represent the fallout of the family trees in the persons of Marcus and Marjorie. May their love blossom into goodness and may the world support their union and the cultures of their offspring. 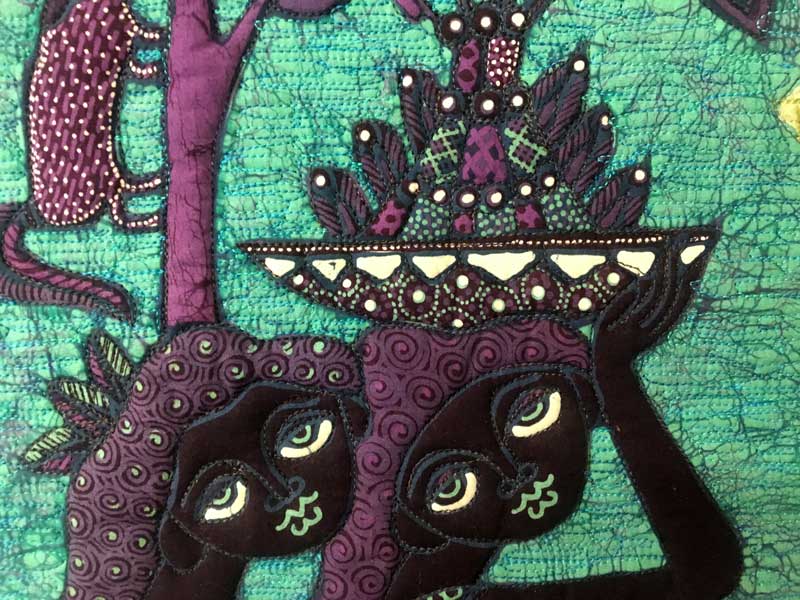 Above and below, detail views of What Could Have Been, Elayne Logan Currie’s quilt inspired by Homegoing. 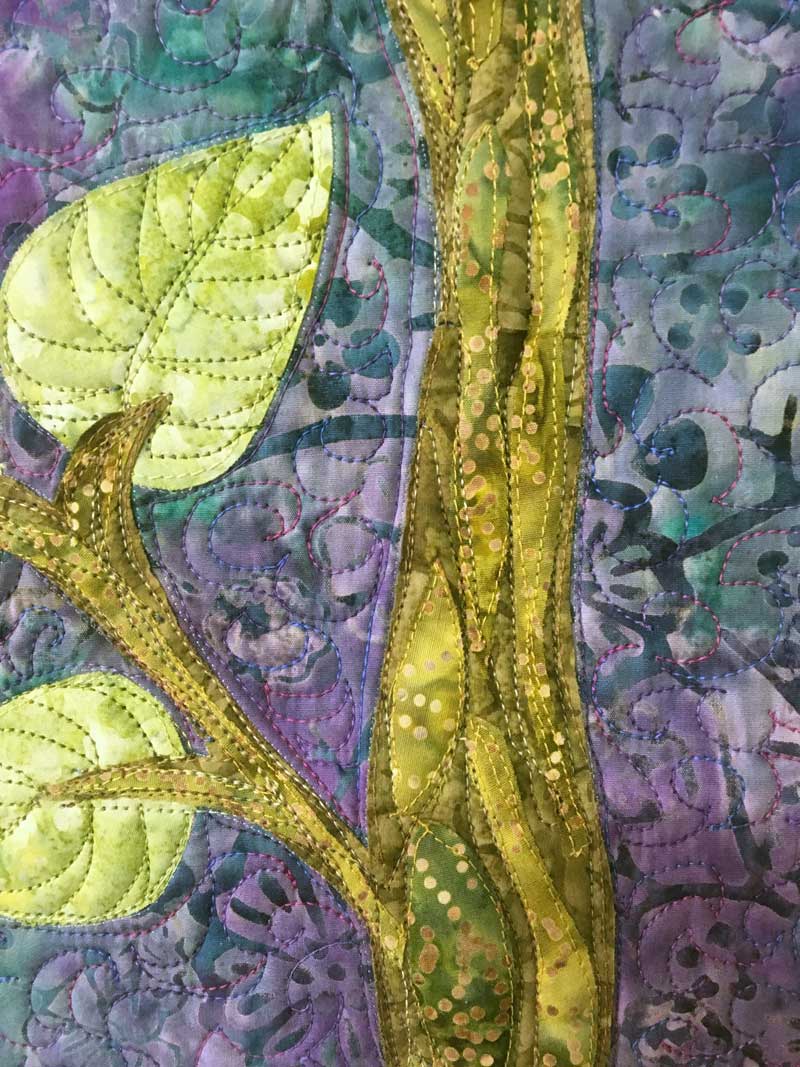 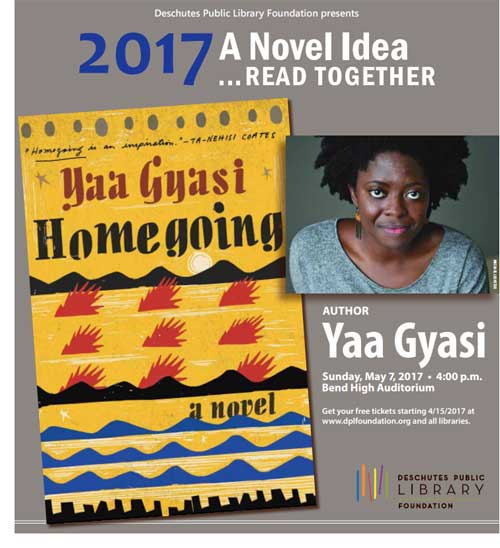 Ghana, eighteenth century: two half sisters are born into different villages, each unaware of the other. One will marry an Englishman and lead a life of comfort in the palatial rooms of the Cape Coast Castle. The other will be captured in a raid on her village, imprisoned in the very same castle, and sold into slavery. Homegoing follows the parallel paths of these sisters and their descendants through eight generations: from the Gold Coast to the plantations of Mississippi, from the American Civil War to Jazz Age Harlem. Yaa Gyasi’s extraordinary novel illuminates slavery’s troubled legacy both for those who were taken and those who stayed — and shows how the memory of captivity has been inscribed on the soul of our nation. (Read an excerpt of Homegoing, courtesy Penguin Random House.)

Homegoing won the 2016 National Book Critics Circle Award, the John Leonard Prize and was a finalist for the PEN/Robert W. Bingham Prize. It also was the recipient of the John Leonard First Book Prize, a New York Times 2016 Notable Book, NPR’s Debut Novel of the Year, and included as Time Magazine’s top novels of 2016.

Homegoing author Yaa Gyasi was born in Ghana and raised in Huntsville, AL. Recently named to the 2017 Forbes "30 Under 30" list, she holds a BA in English from Stanford University and an MFA from the Iowa Writers’ Workshop, where she held a Dean’s Graduate Research Fellowship. She lives in New York City.

Download the Deschutes Library Homegoing PDF, which includes a Yaa Gyasi interview by Hope Wabuke of The Root; a reader’s guide/discussion points, The Transatlantic Slave Trade: A Capitalist Enterprise by Dr. Carmen P. Thompson; and Connecting Points: Tracing the History of African American Literature through Homegoing by Dr. Annemarie Hamlin 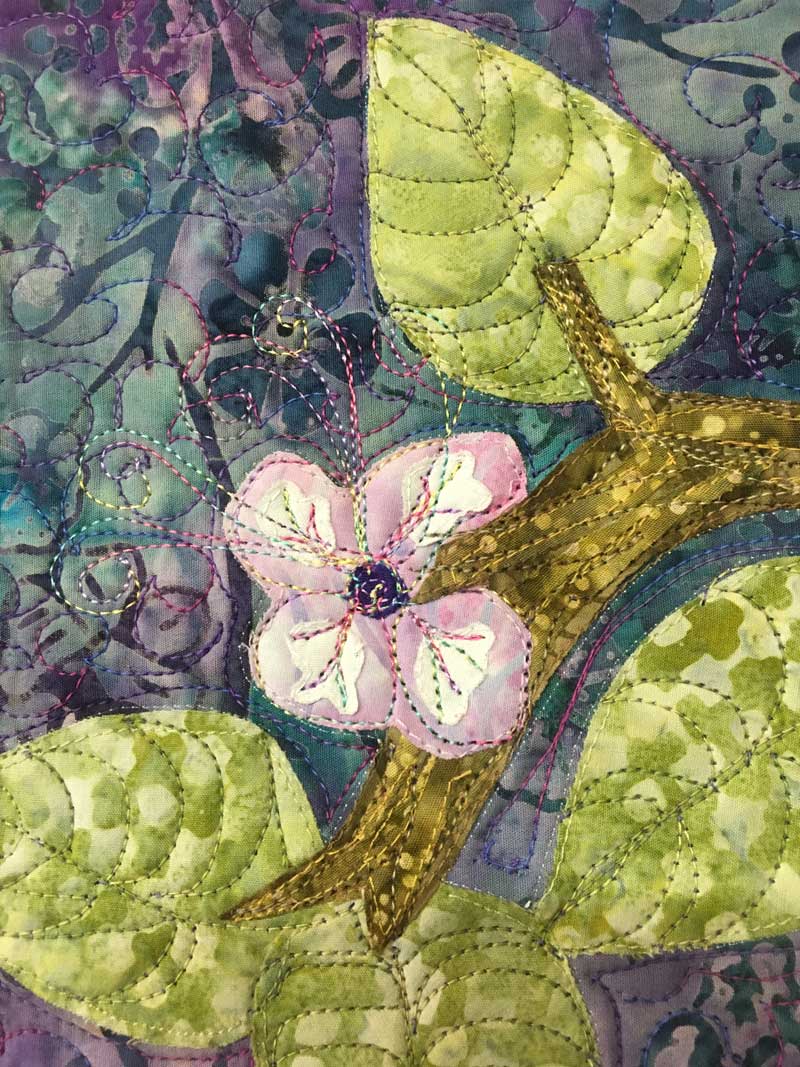 Thank you so much for sharing, Elayne — we love how you have used the Jaka panel, and Sue Shimke’s quilting highlights the entire piece beautifully!

One Comment to “What Could Have Been: Quilt by Elayne Logan Currie”